Jewlan sings “Happy Birthday to You” to his mother, Suriye Tursun, at a public rally. Suriye has been missing since 2018, and has allegedly been sentenced for “assisting in terrorist activities”.

i'm also open for suggestions or additions, message me on instagram

The Terminology Normalisation Committee for Ethnic Languages of the Xinjiang Uyghur Autonomous Region recommends that the spelling Uyghur, corresponding to the pronunciation [ujγur], be used as the English transcription of the word. (source)

Uyghurs are ethnically and culturally Turkic people living in the areas of Central Asia commonly known as East Turkistan. The Uyghurs have a rich cultural history going back almost 4,000 years.

With only a few extremely rare exceptions, Uyghurs continue to be the only population in China consistently subjected to executions for political and religious offenses. 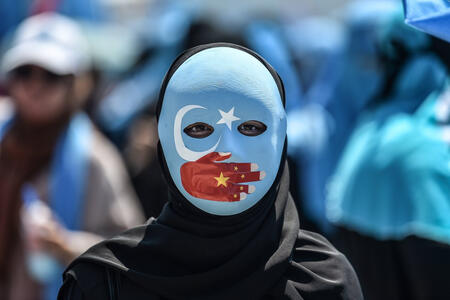 Uyghurs concentrated into state-sponsored concentration camps (advertised to the global public as 're-education camps') are one of the many ways Xinjiang China tries to eradicate Uyghurs.

In 2018, a United Nations human rights panel said that it had received many credible reports that 1 million ethnic Uyghurs in China have been held in these so-called "re-education camps". Many reports cite up to three million Muslims are held in 500 different concentration camps. (source).

this is to direct attention to victim testimonies and news. updates will go first.

Hear what they have to say: 'One story at a time'

Why do Muslim countries stay silent on the Uyghur genocide? - An article by @FreeUyghurNow

“The Government Never Oppresses Us”: China’s proof-of-life videos as intimidation and a violation of Uyghur family unity.

Disinformation, Propaganda and The Uyghur Crisis: The Chinese government’s attempts to craft and promote a false narrative, in respond to international criticism of its large-scale detention of Uyghurs and other Turkic people.

The fight is far from over: A recent investigation uncovers over 5 million blanked out spots in Baidu Maps which reveal 428 locations in Xinjiang bearing hallmarks of newly built concentration camps.

New evidence indicates that ‘graduating’ detainees from Xinjiang’s ‘re-education camps’ have been sent directly to factories to work in other parts of China. - Demand action for brands to stop the exploit of Uyghurs.

NYTimes: Inside China’s Push to Turn Muslim Minorities Into an Army of Workers

Uyghur genocide is a physical genocide.

What has happened to me: a testimony of an Uyghur woman

Forced to teach in Uyghur concentration camp: Sayragul Sauytbay says that she was made to work as a teacher in a detention camp holding Uyghur Muslims. - Audio Interview with the BBC.

Uyghur women are forced to marry and sleep with Han Chinese men to remove them out of Islam. Many detainees are subject to pack r*pe. (source).

Inmates were sometimes forced to eat pork, forbidden in Islam, as punishment (Source 1, 2)

do not donate to change.org petitions. your donation does not go directly to the cause!

Time is up. Tell your favorite brands to stop profiting from Uyghur forced labour.

Join the #NoRightsNoGames campaign - Find your national Olympic committee here and contact them (Here's a .txt sample of a message you can use.)

Demand a call for action, write to your local officials, your country's ambassador to China and China's embassy in your country. Here are infos and a template provided by IUHRD.

Tweet @Olympics The IOC has a responsibility to ensure that the Olympic Games are held in a country that respects international norms. If China maintains its internment camp policy into 2022, they are not a fit host. #NoRightsNoGames2022

Call your US congress representative

Share UHRP's briefings with your community leaders, your Muslim leaders, and ask them to speak about these issues. (1, 2)

Boycott your favourite companies complicit in Uyghur forced labour. (Buy local or thrift instead!) - Here are the fortune 500 companies doing business in Xinjiang

Boycott made in China cotton

The Silence to You by Yu-Jing Huang

Fund Uyghur Tribunal: UK Tribunal to investigate China’s alleged genocide and crimes against humanity against Uyghur and other Muslim population

Support a Uyghur concentration camp survivor in the U.S

Charity Right: Support 400 women with children whose husbands are missing or are locked away with nutritious food packs

for succinct and concise links/information i highly recommend these carrds

Save the Uyghurs carrd

The Torture of Uyghur Muslims carrd

Who are Uyghur carrd

Compilation of Instagram accounts on Uyghur culture and people.

Buy their stuff, check them out or simply share their profile to others!

Here are some ways you can help amplify Uyghur voices and culture.